It’s easy to get seduced by the promise of easy money when you’re starting your online business.

In this episode we talk about some of the pitfalls that can easily de-rail your dreams and what you may want to do instead.

In the show we mention the system that we have working for us inside the Tribegeeks Academy.

You can also find out more from our free Facebook group.

Oh, and as an extra bonus, why not download our free E-book, ‘How To Build A Six Figure Facebook Group‘

Welcome to the Tribegeeks podcast, episode #6, and this week I wanted to dig into the topic of monetising your group and just how the process of sales and making money fits into the Facebook group model and what’s involved, And I want to talk about a trap that almost killed our business, that you need to avoid at all costs.

So, let’s get started.

So, as we’re talking about making money from groups and, I guess making money online in general at this point. I’ve got to go ahead and address the Elephant in the room, and it’s one that always blows my mind and I tend to get a bit worked up about it, but I’ll try not to today because I’m sure you don’t want to hear me rant!

BUT, there’s this myth that’s perpetuated around the online space around what’s needed in order to make money… and I’ll use the word myth, because I’m trying to be kind.

But for many years it’s been there’s this notion that someone can come into the online space, twiddle a few buttons, pull a few levers and earn an absolute fortune in no time flat, and it blows my mind.

I mean, if someone told you that you could start a physical business today, invest hardly any money, not have to learn any new skills and invest hardly any time… in fact you don’t even have to be that clear about what it is that you do or what you sell, and you’ll earn a TON of money by the end of the week, you’d say they were full of it.

A lot of people expect to do this online, because they’ve heard about that Internet money right?

Now I’m not saying that back in the day when paid ads were cheap and results were much easier to achieve because there was hardly any competition it was possibly to get a massive return on ad spend without having to really be that good, but those times are well and truly behind us, everything’s far more competitive today and standards as well as costs are constantly rising.

So the first point I really want to make is that if you’re listening to other marketers or gurus that are telling you that you just have to send a couple of emails or throw up a quick sales funnel and you’ll be rolling in green stuff for the rest of your days.

This should be a huge red flag because you’re flat out being misled, and it pisses me off to be quite honestly.

The biggest difference is that when it comes to online, all you really need is a smartphone or a computer, a Facebook account and an idea and you’re in business.

You haven’t really invested anything as such, and so if your business fails, you’re not going to lose your house or your car.

You’re not going to have stock to liquidate and all manor of business loans, or even worse, staff that you have to let go and tell them they don’t have a job anymore.

So the idea of starting a business online has massive appeal, but because there’s no huge risk to starting an online business, so many people aren’t that dedicated to making it work.

Their back’s not against the wall, so to speak.

And it’s a major reason why so many people fail when it comes to building an online business… the barrier to entry just isn’t high enough.  So people buy courses because certain guru’s tell them that there’s easy money to be made, and in reality, the online space is one of the most fiercely competitive spaces on the planet to build a business.

And the reason that I bring this up, because I know this is an unpopular thing to say, right… you’ve probably heard the saying, give the audience what they want…. And nobody wants anything that sounds like hard work, right?

I’m here to give you an honest overview of what works and not the BS that lives out there in Guruland.

So this leads me on to the second point that I want to make because this is something that we had to kinda figure out as we went along in our business.

And I think this is because when you’re just getting yourself started with your business you’re in survival mode right?

You’re usually not really sure what you should be doing so the most attractive thing in the world at that point is other people’s success.

When someone shows up and says ‘look at all this money that I just made in a week’ we think, Oh wow, I’ll do what that person’s doing because look at how well they’re doing.

Usually this is the kind of press that big product launches get, and I know because I was totally seduced by it too.

I remember hearing about how John Reece did the first Million Dollars in sales in 24 hours and it blew me away.

What nobody told me at the time was that he had most of the big name marketers at the time sending his offer to their audiences as affiliates. And those guys all had massive email lists that they were promoting to.

Well those guys all had to be paid their commissions.

Then he was spending a fortune on ads to get his offer out there, so they all had to be paid for.

Then there was anyone on his team that had to be paid, etc etc.

Now I’m not saying that he didn’t make a boatload of money, I hope he did, but what I am saying is that it’s really easy to be seduced by the big numbers… but no-one really tells the whole story about how much of that headline money they get to keep.

And when we’re in survival mode, where we’re just trying to get a sale, those headlines look amazing.

But to get to that point takes a lot of hard work, investment and sacrifice. It doesn’t happen overnight and anyone who tells you it does is lying to you.

Conversely, there’s another type of business model that isn’t always as glamorous, but it’s a lot more sustainable and it’s a lot more predictable… and if you get it right it’ll go on to sustain your lifestyle for years and years.

And that’s the relationship business model, and this is where our Facebook group comes in.

Now the thing is that a lot of people figure that as soon as someone becomes a member of their community then they’d better sell them something and fast.

Gotta get that headline money right?

It’s a bit like sitting down with a doctor and them just writing you a prescription before you’ve told them what your issue is.

Imagine if that happened, you’d feel pretty irrelevant wouldn’t you… after all this person hasn’t even asked you what’s wrong and they’re telling you what to do to fix it.

I think we can agree you’d be out looking for a real diagnosis and you wouldn’t visit that doctor again.

But imagine if the doctor took the time to ask you questions and you really felt like they cared about how you were doing?

Well, you’d probably go back to that same doctor again and again wouldn’t you?

You’d get to know each other develop a working relationship.

Now there’s no harm in making offers quickly when someone comes in, as long as we’ve taken some time to ask the person what it is they need help with and send them to the product or service that we genuinely feel will actually help them.

And the power of doing this is that if we actually help someone, if they feel like you’ve got their best interests at heart, then they’ll keep coming back and you’ll have a customer for years to come.

We looked at where we wanted our business to be and we asked ourself ‘what’s more important to us? The launch model, which can be very much feast to famine, or a model that didn’t necessarily see those huge paydays, but was predictable income every month that we could more or less count on what was coming in?’

We decided to go for the model that brings in predictable income every single month year in, year out and THEN sprinkle in some product launches for a bump here and there.

So to move on to the last big point that I want to make here, and one of the reasons that we believe that your community is so vital is that when you do get to make your offers, the warmer your leads are, the better your offers will convert.

So as traffic goes, the traffic that you send to an offer from your Facebook community will be the warmest traffic you can really get.

And that’s what most marketers want more than anything else, a warm traffic source to sell to.

One of the biggest reasons most people struggle to sell anything from their group is that they build the KLT and the goodwill and then never actually make any offers, and then before you know it you’re firmly inside the friend-zone and it makes it weird when you do make an offer.

So, our advice is to have a clear and effective sales process in place inside your group that leads that person along a path of finding out what it is that they need, then offering value based on what they tell you they need help with… and then, only once you’ve delivered value, THEN lead them to an offer if you believe that offer can help them.

We have this automated inside our Facebook group, so there’s a process that we have set up that does this all in a very short time.

It’s something that we share with our students inside the Tribegeeks Academy.

I’ll leave a link in the notes in case you’re interested in how we’ve got that set up.

So in order to make sales with your group, make sure you build the relationship with your members, add value and give your members a great reason to be in your group… but also make sure that you’ve got a conversion process in place to turn those members into customers when they’re ready to buy.  And if you do it right, they’ll come back and buy again, and again, and again… building you a real and solid business that’ll take care of you for years.

Anyway, please don’t forget to subscribe to the show. It really means a lot to us.

Thanks very much for listening to my little rant.  I’ll be back again next week.

In the meantime take care. 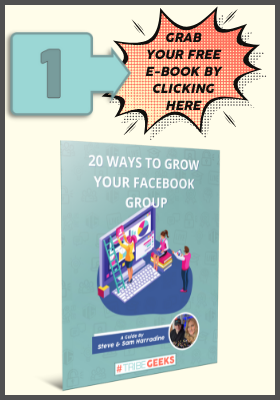 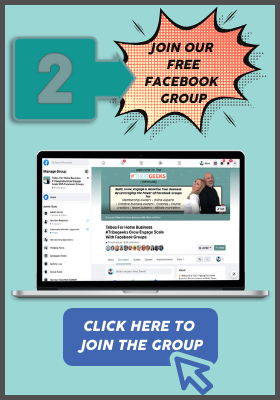 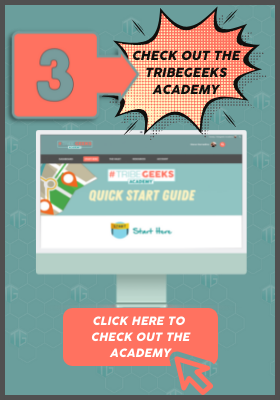